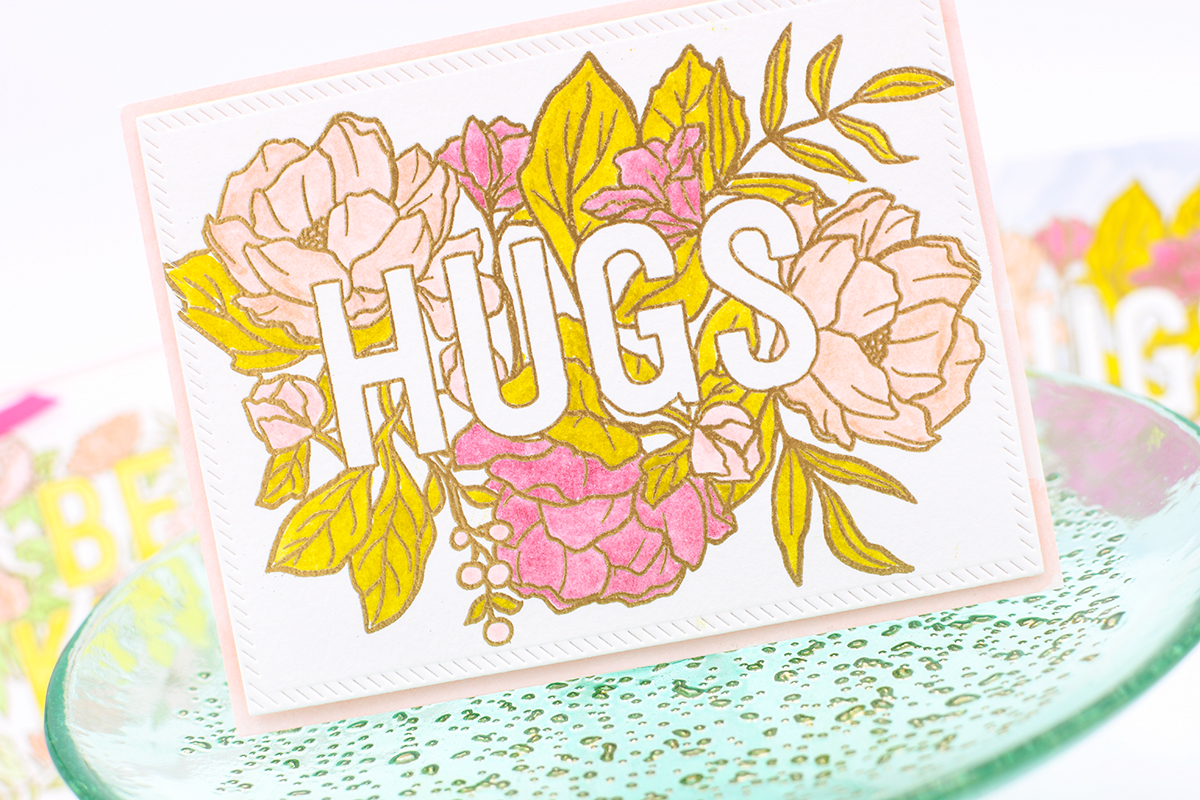 Happy Wednesday!  My sweet friend Rubeena went from cardmaking extraordinaire to opening up her own online shop, The Gray Muse, earlier this year.  She is an amazing artist and created a line of adorable enamel pins for those of us who love living the crafty life.  They're really cute and some of them are even interactive, like the 2 that she recently sent to me.  In the last few months she's slowly starting to add stamps to her inventory and when she invited me to try them out, of course I said yes! 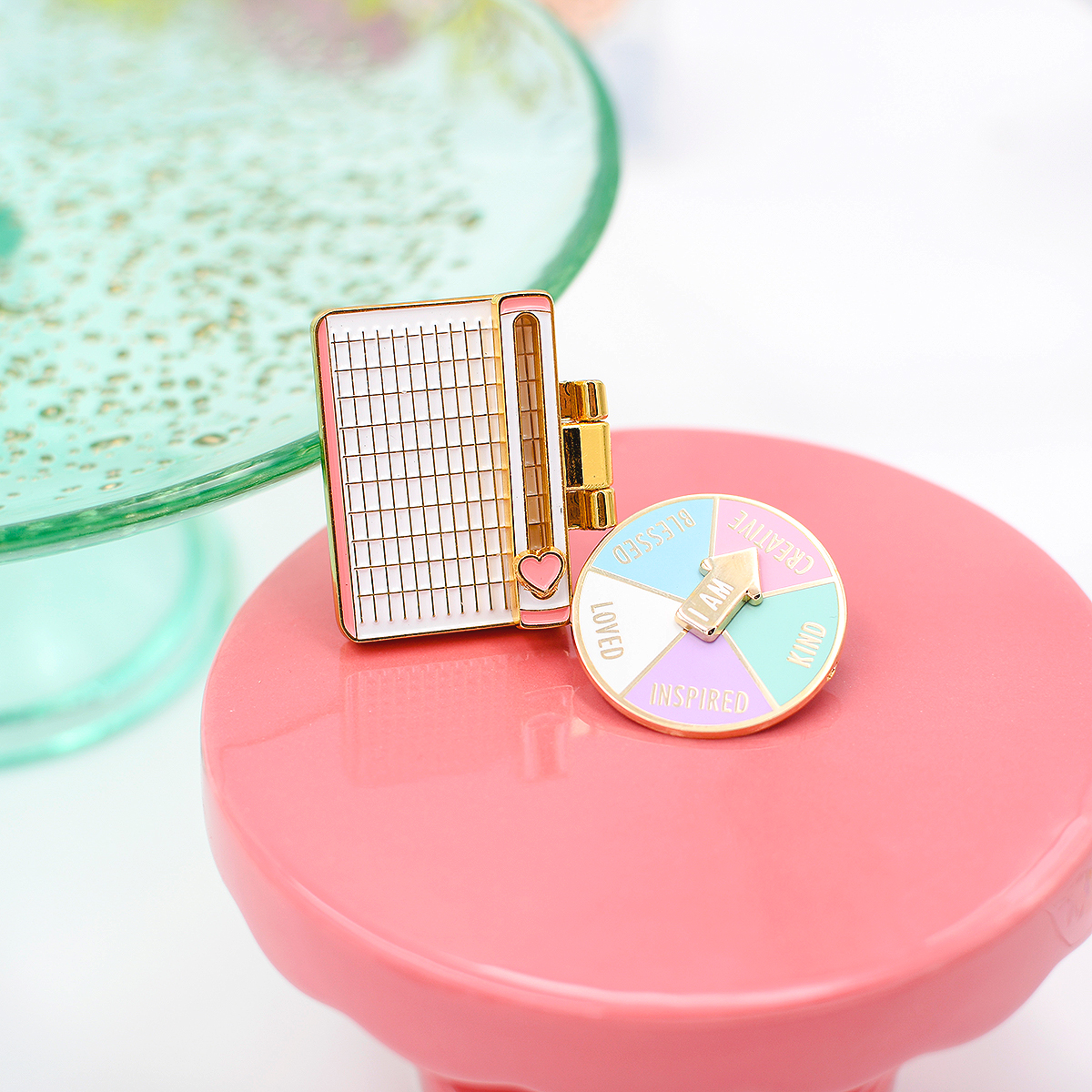 They are both floral and beautiful and it gave me a chance to do some coloring, which I don't normally do, but it's always a good idea to nudge yourself into unfamiliar territory now and again.  And with images like the HUGS and BE KIND stamps, it's extremely rewarding! 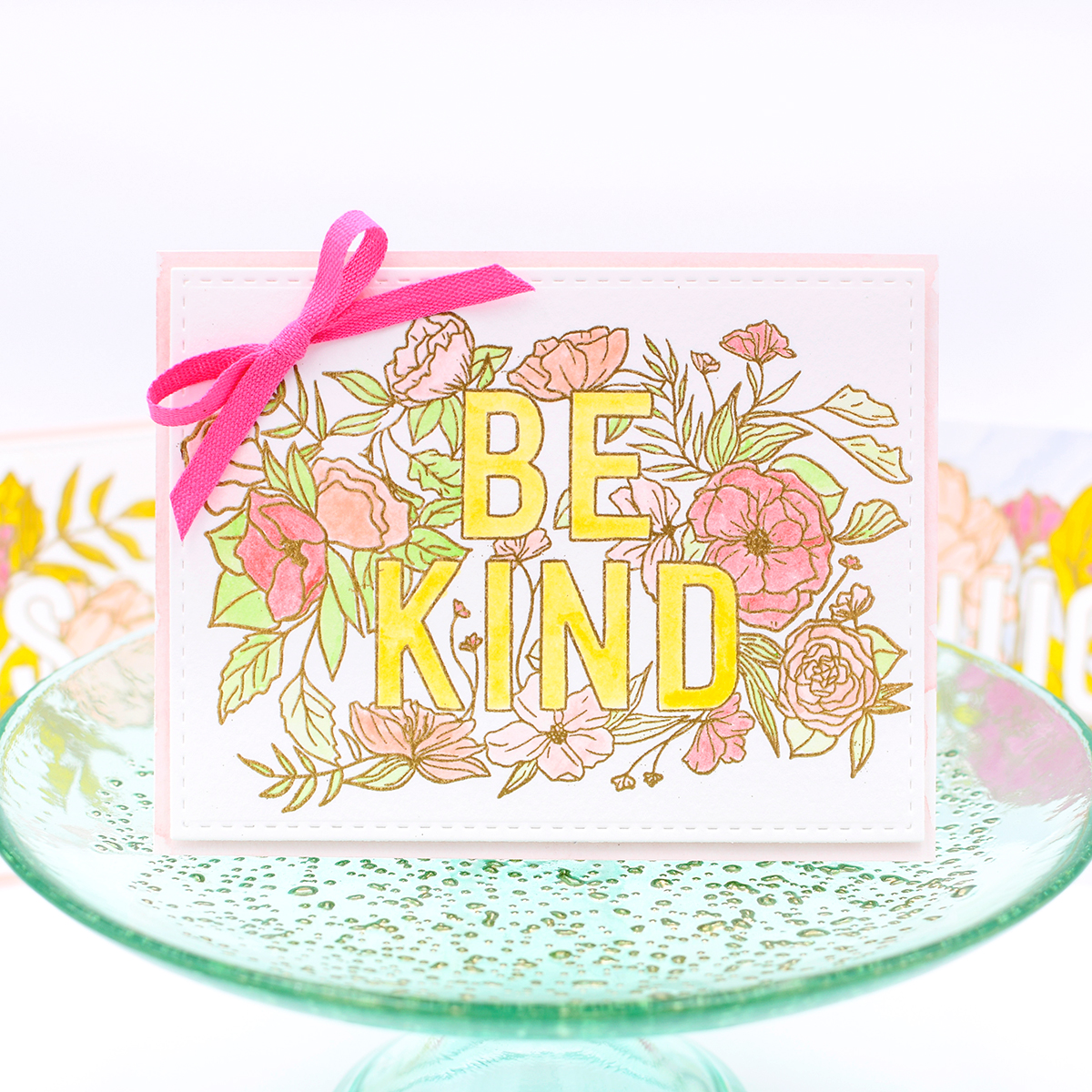 I ended up making a few cards so I'll break up this post into 2 parts, with the second one coming a week from today.  My first two cards feature the HUGS stamps, which is the word surrounded by big, beautiful blooms and lots of leaves.  These cards are similar because I found a color scheme I loved and wanted to try a couple different things with it. 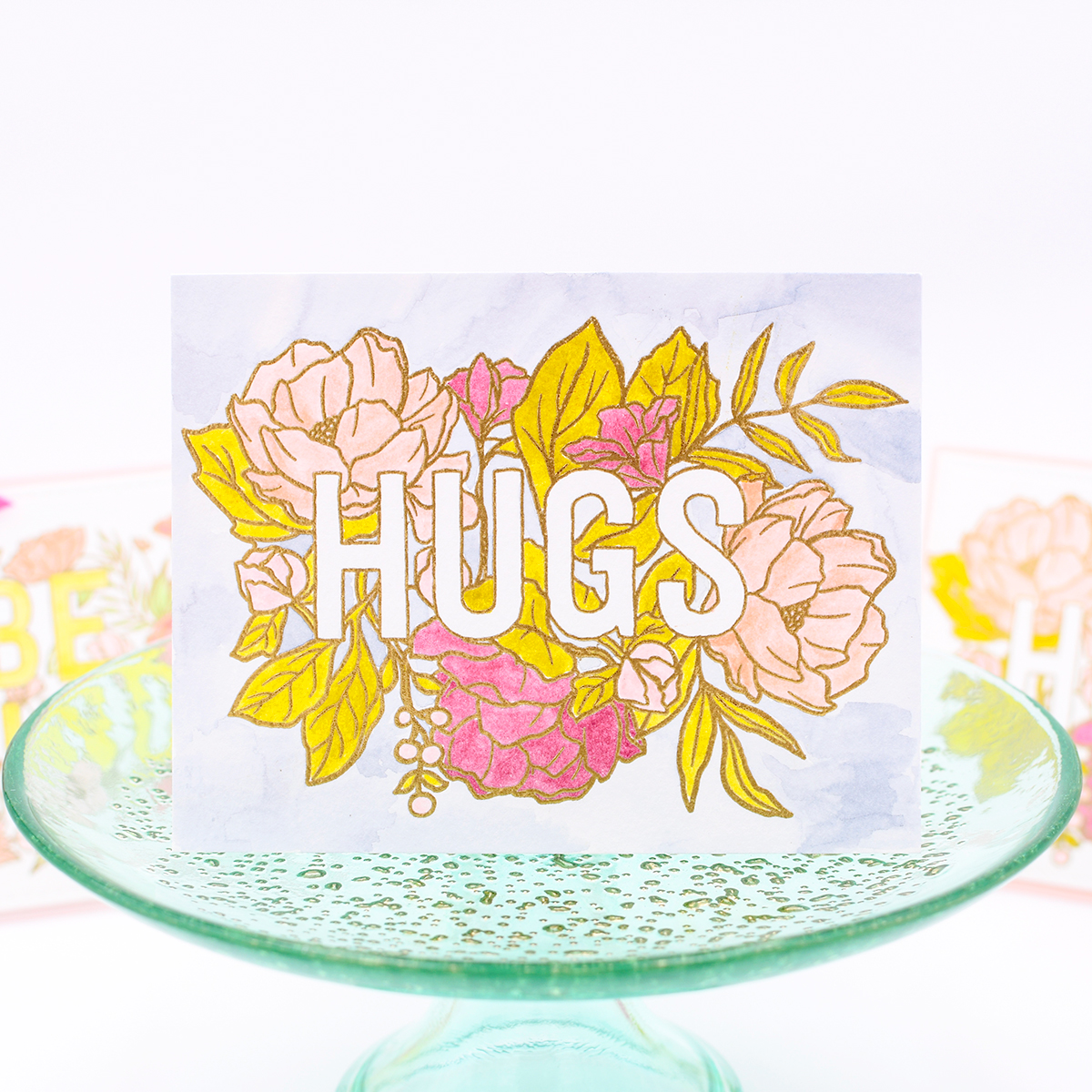 The first card has been colored in with ink and some blending pens that I got years ago from Stampin' Up.  I just dabbed the ink pad with the tip of the pen and then began coloring.  It produces a softer color with variations, almost like watercoloring.  The peach, pale pink, magenta, and chartreuse combination is a new favorite for fall.  I stamped the image with watermark ink, and then heat embossed it with gold powder so the colors wouldn't spread and the lines of the art stayed crisp. 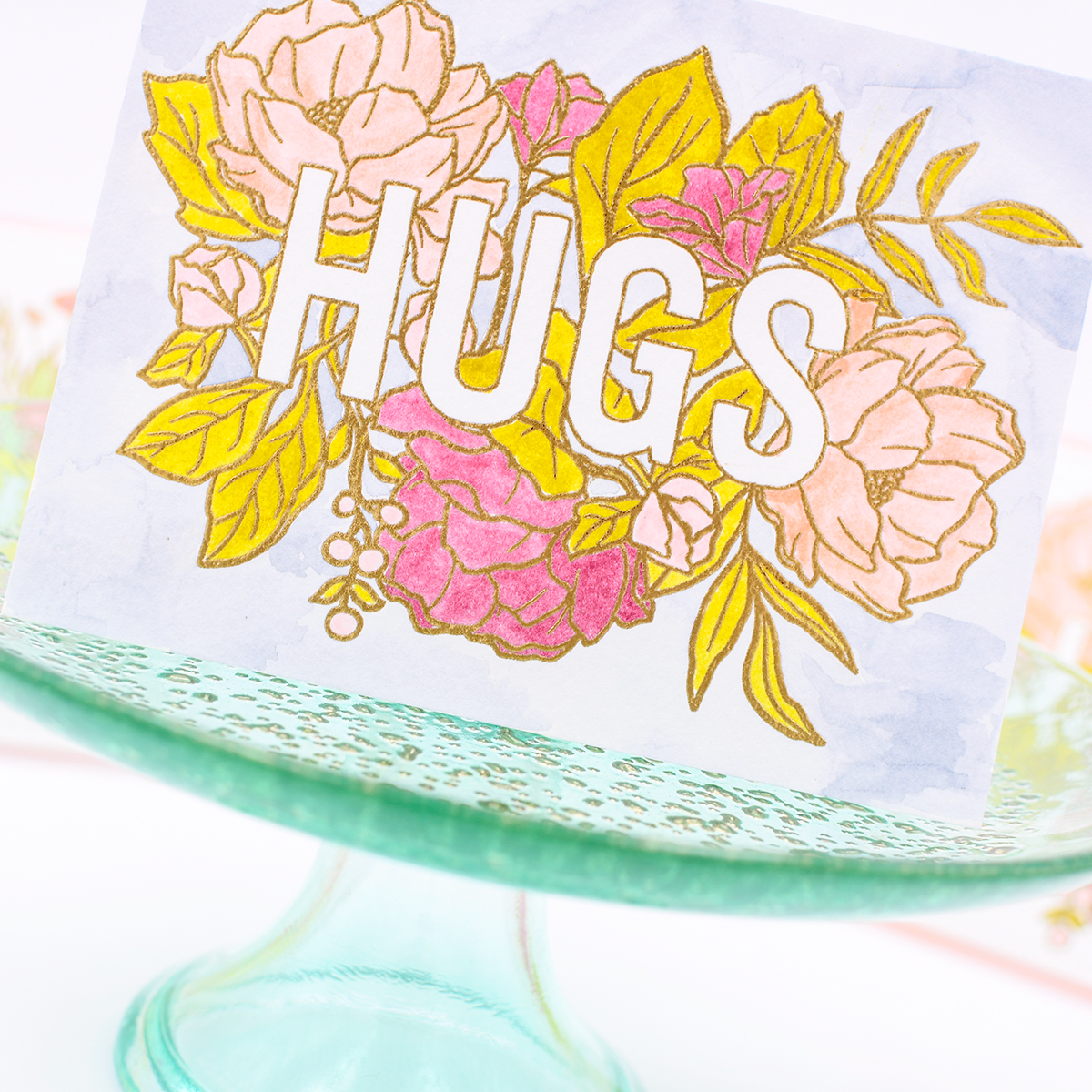 I wanted to add some gray-blue or navy but I had trouble achieving just the right color so I tried out a blue marker from a set of Zig Clean Color Real Brush markers which I've had for months but have never used.  I dipped it in a little water and colored all the white space around the image, and then the interior as well.  The letters of the word HUGS are the only parts left untouched. 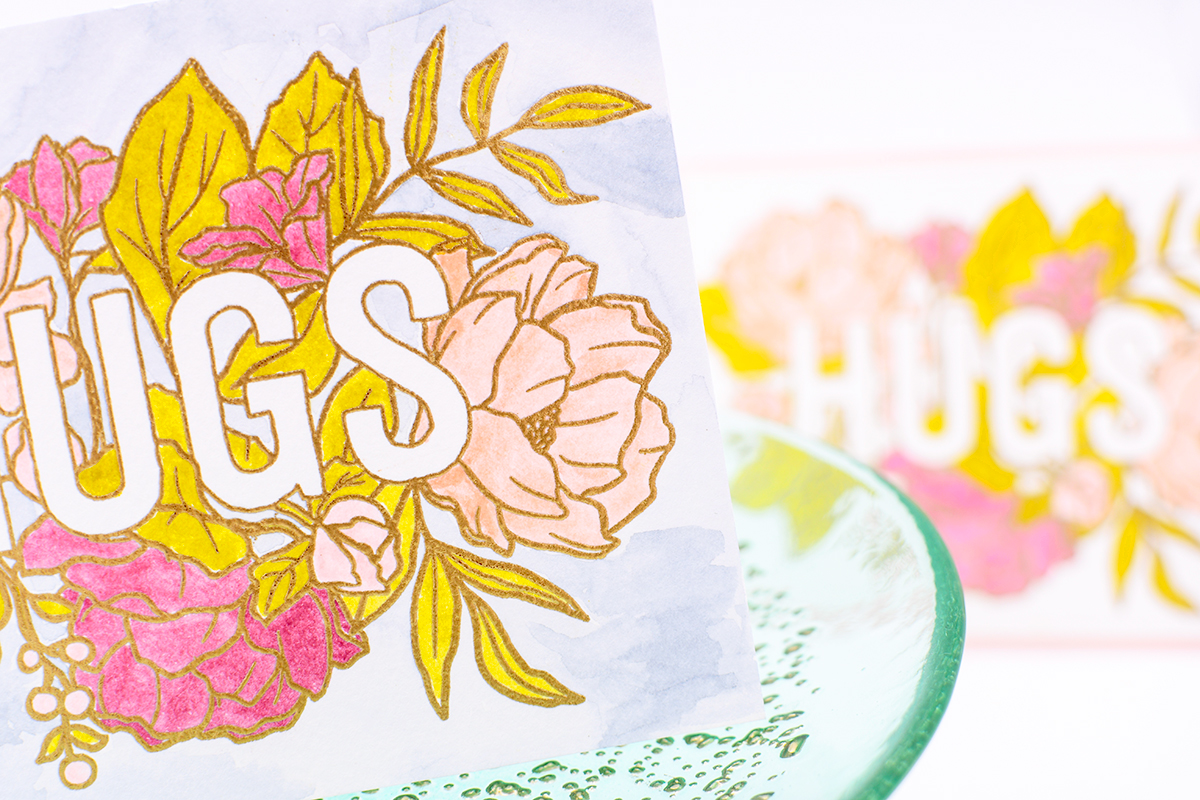 I thought it looked pretty the way that it was so I didn't do anything else to the card except adhere the panel to a card base. 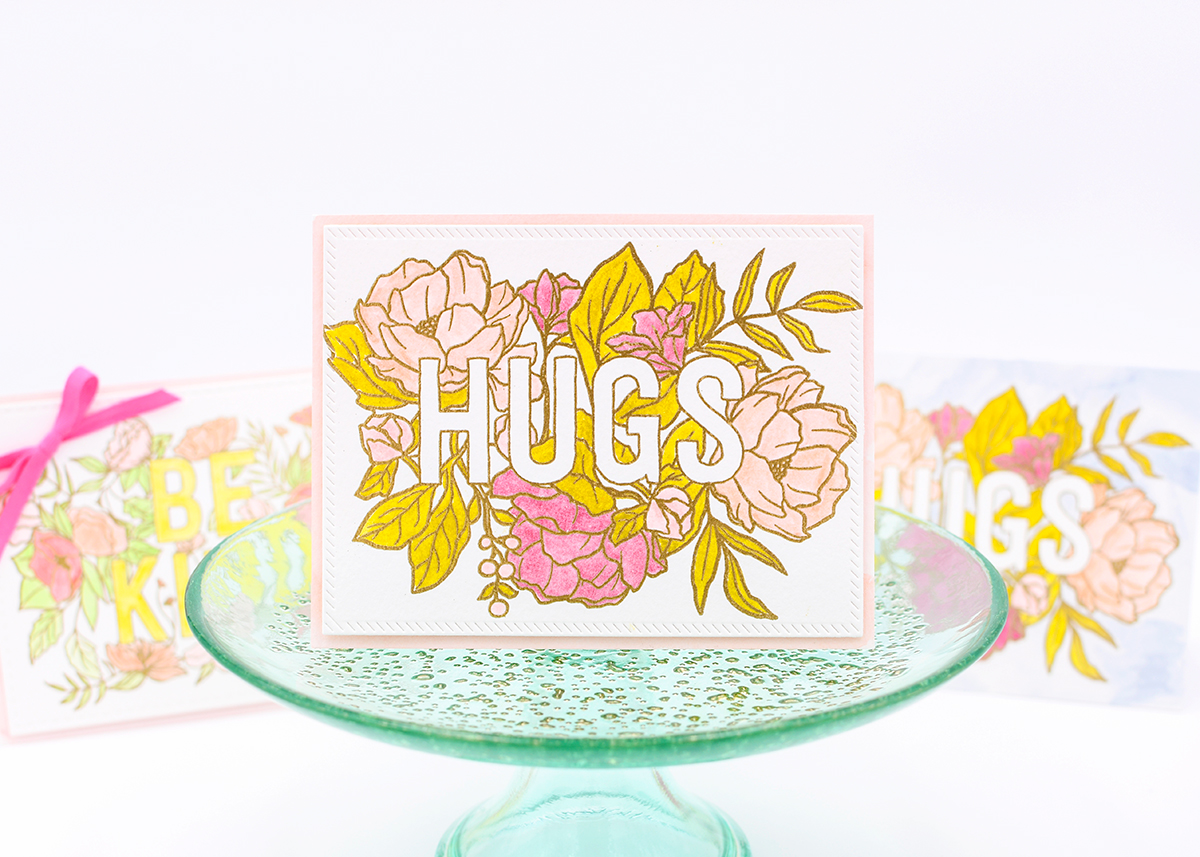 I used the same color palette on the second HUGS card, though omitted the blue watercoloring this time.  I trimmed the edge with a diagonal stitch die from Pinkfresh Studio and adhered it to a panel of pale peach watercolor paper that I'd made a couple of weeks ago.  Whereas the original card was dynamic and moody with the gray-blue background, this one has a lighter, soft background. 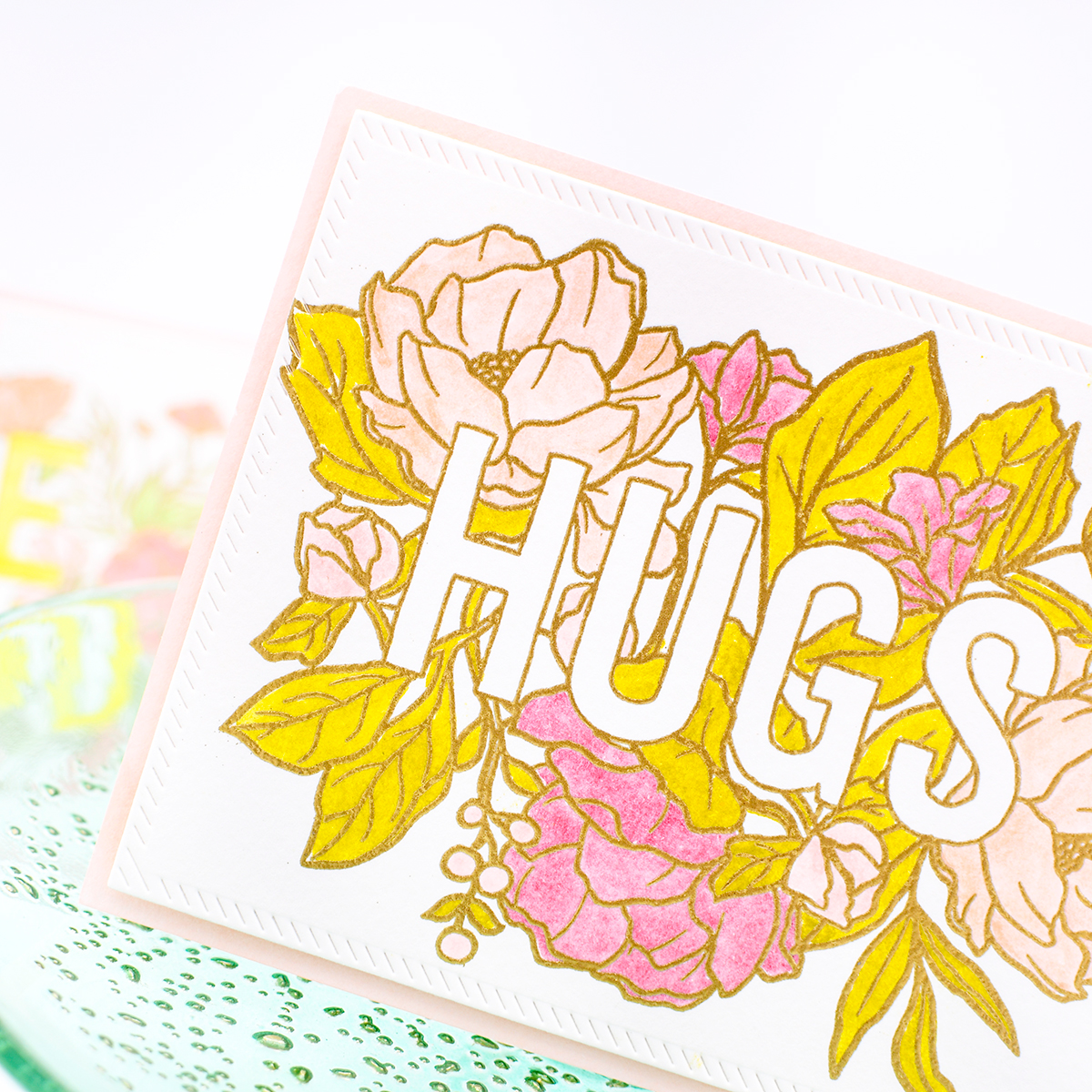 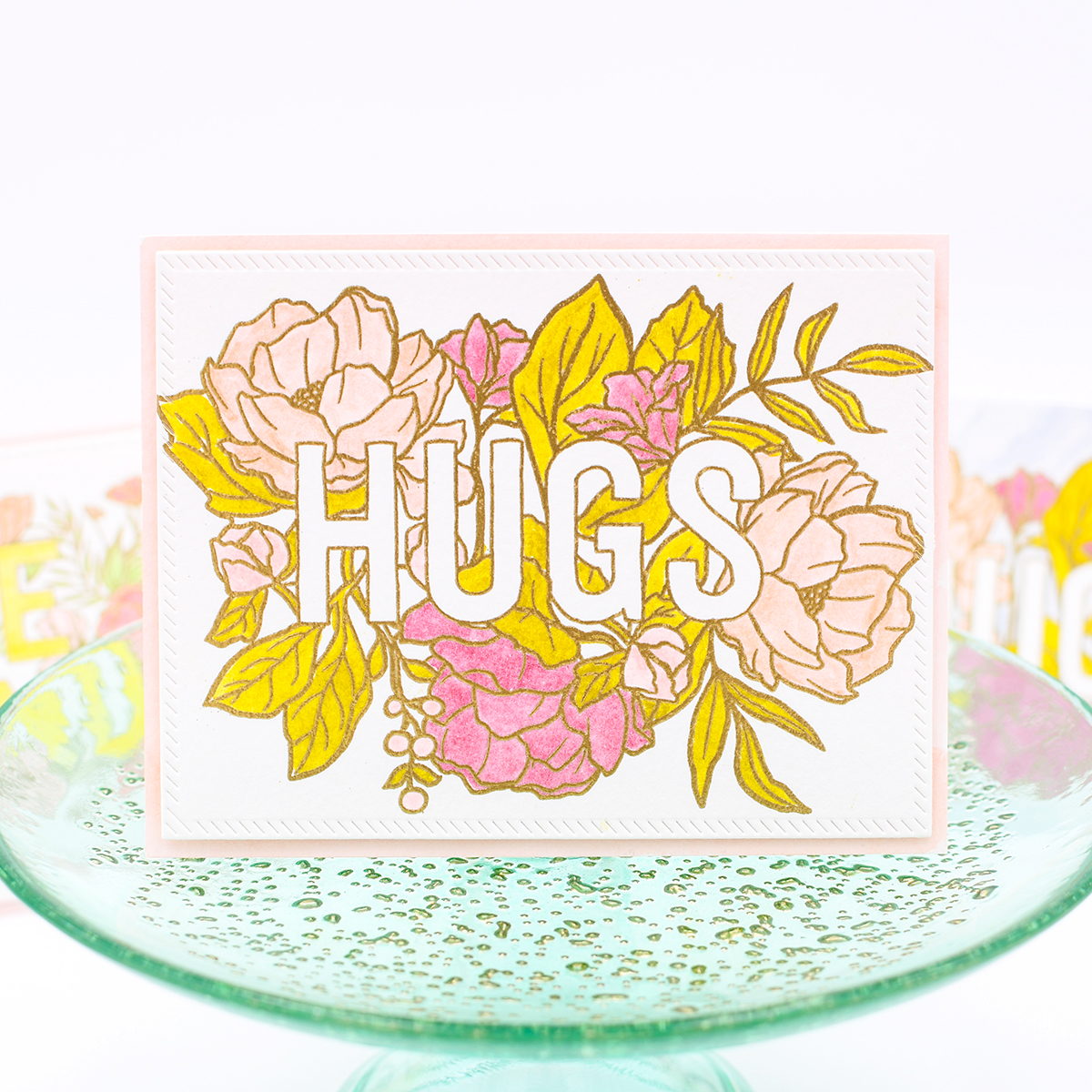 The last card in today's post features the BE KIND stamp, which is the words again surrounded by a bed of smaller florals.  After embossing in gold, I've used the blending pens again, but the colors are springier, with brighter greens and pinks and the addition of a happy yellow. 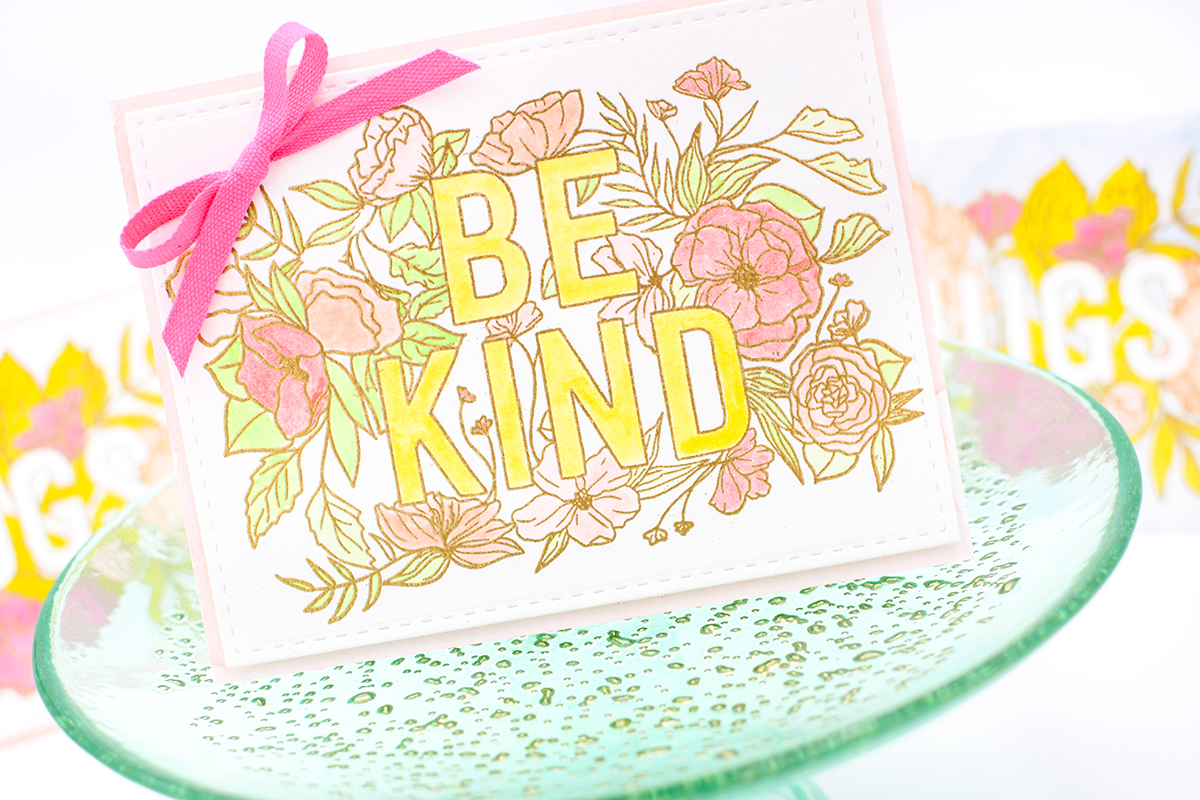 I trimmed this with a basic stitch border and matted it onto a pale pink watercolored panel that matches one of the pinks in the flowers.  I added a pretty pink bow, too, to help set a cheerful tone. 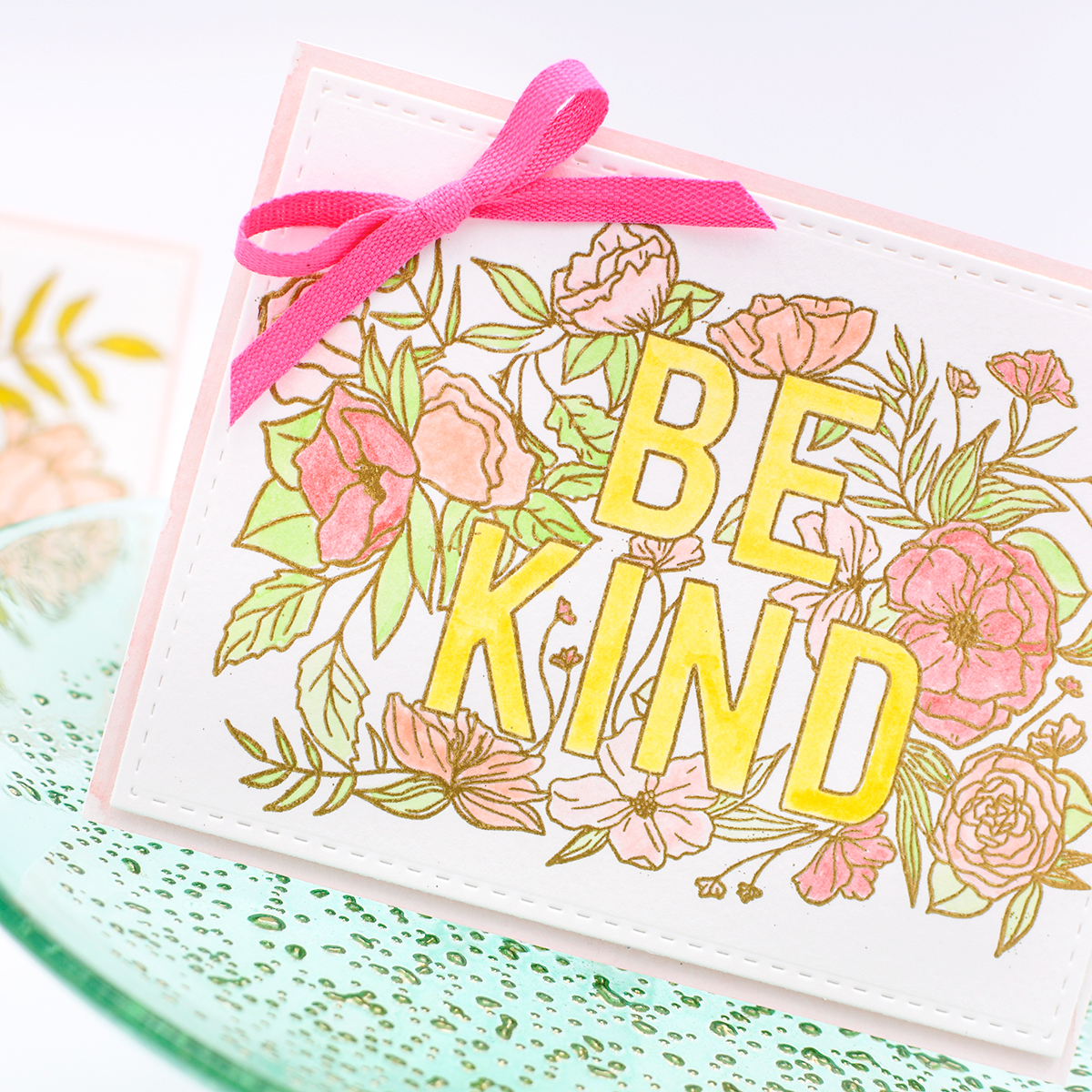 Don't forget that the second half of my cards featuring The Gray Muse stamps will publish next Wednesday (October 30th).  I hope to see you back here then and be sure to check out Rubeena's shop The Gray Muse where you can purchase these stamps, as well as her enamel pins.  She also has an Instagram page for more inspiration! 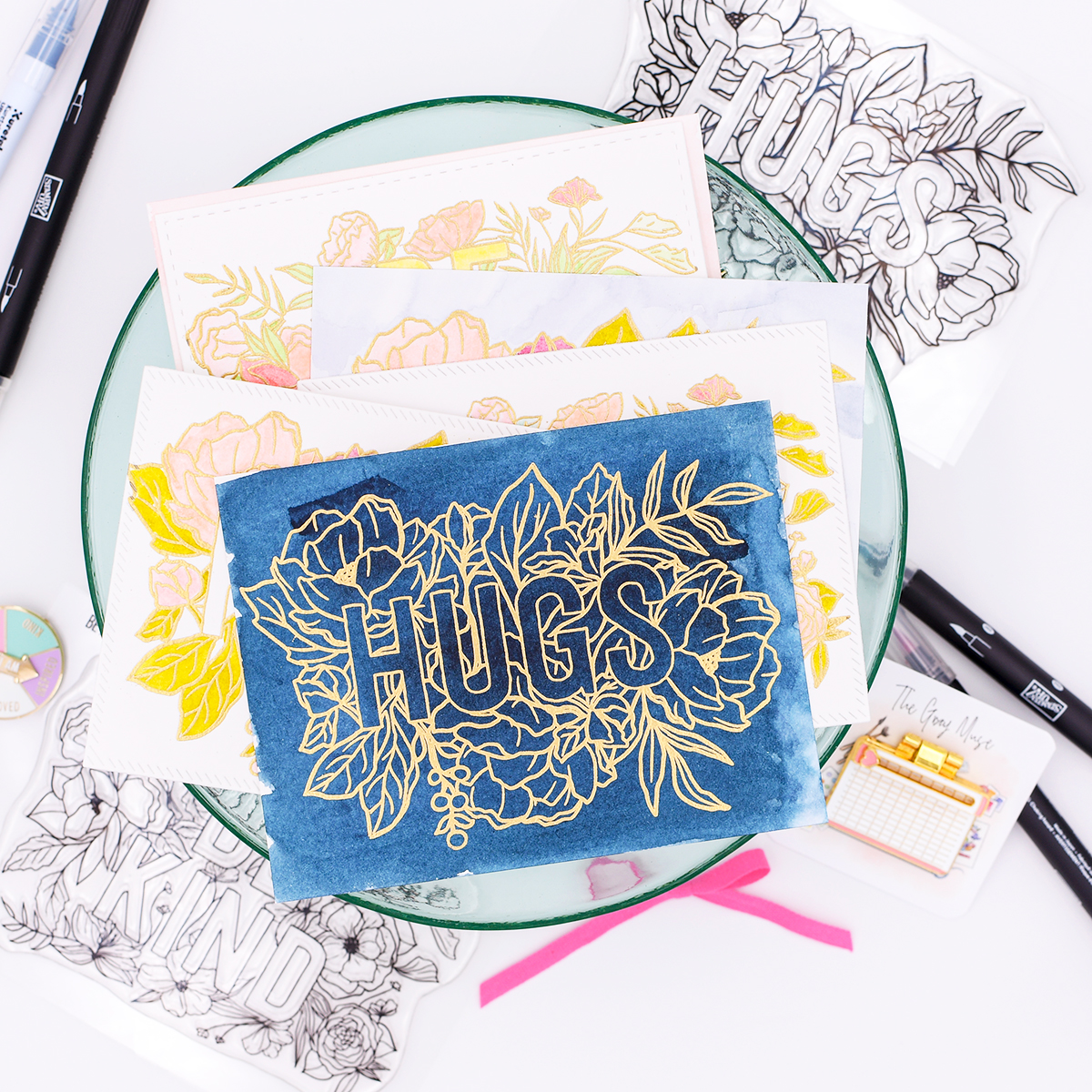