good morning, all!  it's Monday again.  it seems like last week flew by; it's likely due to the fact that Hoss was off on Monday and i was busy organizing all week.  we had sort of an up and down weekend, and were forced to take it easy on Saturday and Sunday.

my obstetrician has been concerned for the last couple of months that Little #2 is not growing fast enough.  we've had a few ultrasounds and about a month ago, it looked like the baby was going to be just fine.  however, at my appointment last week, he ordered another sonogram, just to be on the safe side, which i had on Friday.  after looking at the results, he's concerned that s/he is still too small for the gestational age and so he told me to cancel any weekend plans we had and just take it easy.  he wants to start monitoring the baby's heart-rate, which we'll do today, because very small babies, apparently, don't handle stress inside the womb very well.  depending on how the test goes, we may end up inducing before the due date.  the doctor said that he's not worried, but he does want to stay on top of it.  we have our appointment this afternoon so i'll keep you posted.  i have quite a few questions for him! 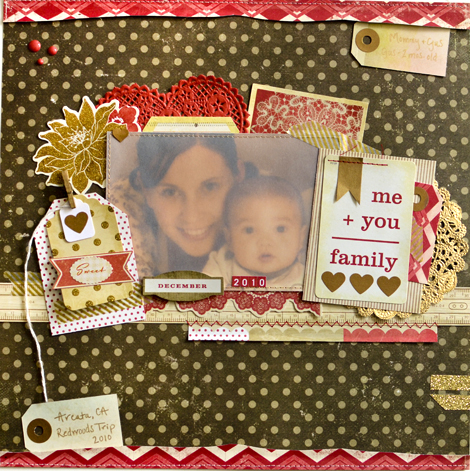 i have a rare layout for you today.  i don't scrapbook much, mostly because i'm honestly not sure what to do with the layouts after they're done!  i could start an album but then you have to find a place for it.  i could display it, but you have to buy a huge frame to keep it from getting dusty...and then find a place for it.  i'm not anti-scrap, by any means; i just prefer projects on a smaller scale.  i do like having the large canvas on which to create, though.  i like that a lot...although it also intimidates me when it's time to adhere everything.  it has to be just so and there are many, many more details that have to be in place...it kinda makes me nervous to put it all together! 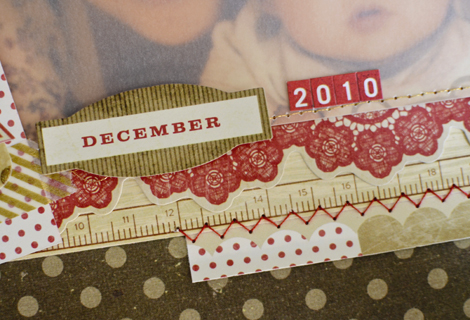 the layout was inspired by the Creative Weekly assignment on Crate Paper this month.  we were asked to focus on the color RED.  after Christmas and Valentine's Day, i was a little red-ded out but once i got into picking and choosing my embellishments, i actually found it difficult to narrow down my color choices.  i almost ended up with yet another red and yellow pairing but in the end, after seeing all of the beautiful gold elements from DIY Shop, i went with those instead. 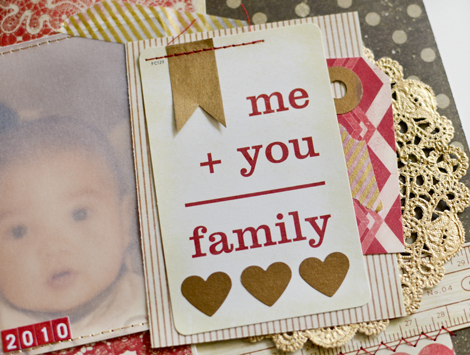 i've definitely been on a gold kick since the fall anyhow and i don't see it fading anytime soon.  i used a couple different shades of gold for my layout; a dark, antiqued shade and a lighter, shinier hue. 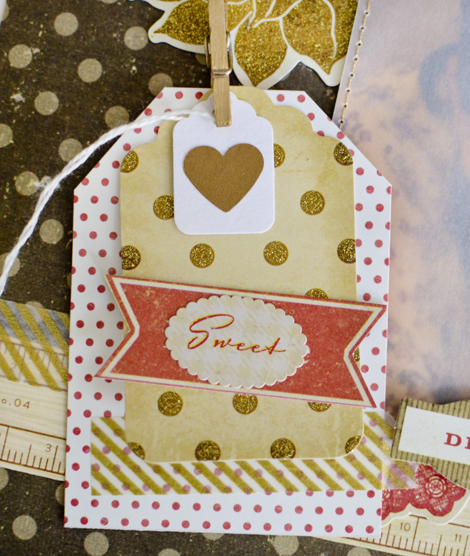 i painted a bitty clothespin with my gold leaf pen to clip a few different tags together.  i absolutely LOVE the cream tag with the gold glitter dots on it.  it's from DIY Shop and the whole collection is so classic and beautiful--it's by far my favorite of all the new releases from Crate this season! 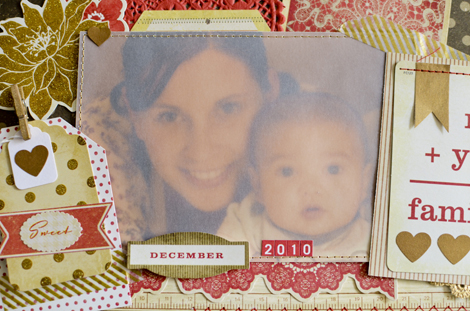 Hoss took this photo of Mr. Bagubian and me 2 years ago during our first trip up to the Redwoods in Northern California.  Gooby was just 2 months old and i wondered if we were crazy to set off on a major road trip with such a young baby, but he slept almost the whole time we were in the car--and we were in the car a lot!  the photo was taken in sepia and i wanted to tone it down just a bit so i sewed a piece of vellum over it to soften it up and add to the layout's subdued, old-time look.

if all goes well this week, i hope to be back with you again in a day or two with a bit more gold.  in the meantime, wish us luck at our appointment today...let's hope Little #2 is nice and relaxed.