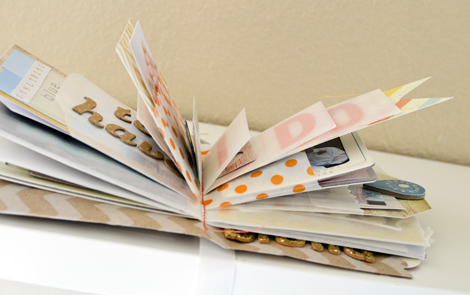 hey there, friends!  today i'm excited to share a mini album with you.  we had a special assignment this week over at the CP blog and were asked to share one last project using The Pier.  along with our creation, we were also to tell about a favorite memory from this summer.  Nemy turned 6 months yesterday (September 5th) and she is still exclusively nursing.  by that i mean, no formula, not even breast milk in a bottle.  just me.  that's kind of a long story but what it also means is that i'm tethered to her 24/7.  most of the time that's not a big deal but we mothers--heck, all parents--need a break now and then, right?  in 6 months i've been out of the house without her less than a handful of times--and once was to go to the dentist so should that even count?!  on August 11th, Hoss and i celebrated our anniversary and got to go out to dinner ALONE!  no toddler, no baby, no children's menu, high chair, or anything else "kid-friendly"--it was just the two of us at an adult restaurant.  and it was wonderful! 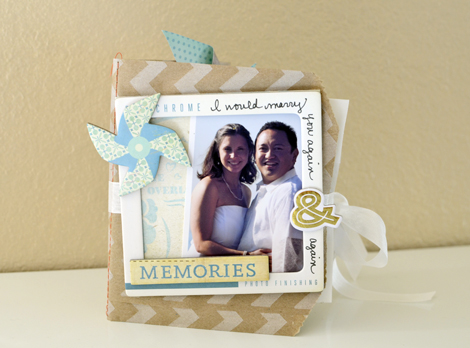 so i used The Pier and my favorite summer memory to make a mini album depicting our weddings.  no, that's not a typo--i said weddings--with an 's'.  Hoss and i have gotten married twice.  the first time was in November of 2006, on a beach in Corona del Mar, CA.  it was a spur of the moment decision, there were 6 people there (including us), and our officiant was also the photographer!  (he's a mutual good friend who did us a great big favor, including driving 6 hours from Mammoth Lakes down to SoCal, and surprising me by bringing my good friend along on the trip with him.) 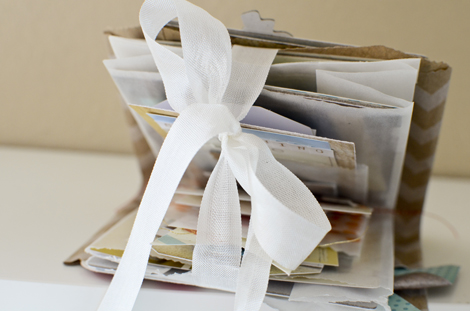 i made the album using bags...mostly different sized glassine, plus one kraft, for the cover.  i started by snipping off the closed ends to create more pockets, then arranged them on top of each other.  i folded the bundle in half and stitched up the middle.  filling the album took careful thought and planning, and once everything was in place, it was pretty thick and bulky.  a length of cream seam binding tied in a bow keeps the album closed, but as you can see from the photo, it's still pretty fat. 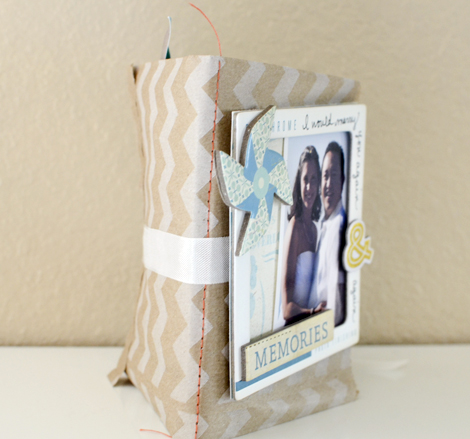 the first half of the album is about our first wedding.  because CP wanted to focus on The Pier, i used as many TP products as i could.  a lot of frames, tags, and chipboard made it into this project.  and because we were married on the beach, The Pier was absolutely perfect for this album with all of its beach-themed coordinates. 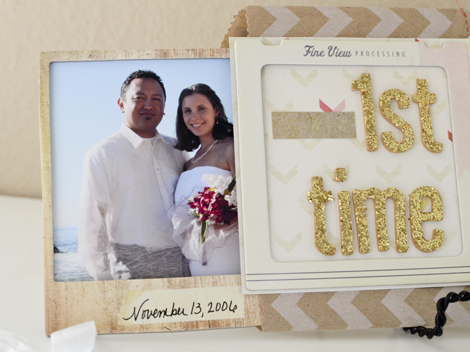 the gold glitter letters are Maggie Holmes and the gold foil alpha stickers are American Crafts.

Crystal Cove...such a beautiful place!  a couple days before the wedding, Hoss and i went out looking for a place for our ceremony and found this beach.  we both knew right away that this was IT. 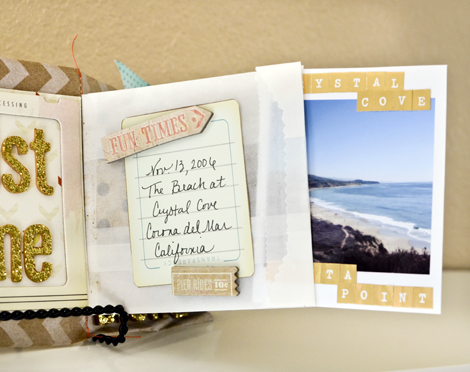 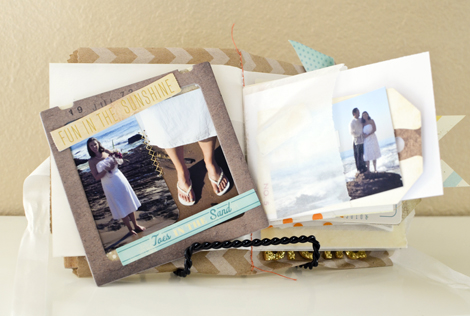 on the big day, we parked the car, then went out walking and happened to stumble upon a big round rock that the 3 of us (our officiant, Hoss, and i) could stand on.  that part actually was just a fluke as we hadn't seen it when we went scouting for locations.  the other great thing was that on a Monday in November--even if the weather is perfectly sunny and warm like it was that day--there aren't many people at the beach.  we had a very private wedding on a very public beach. 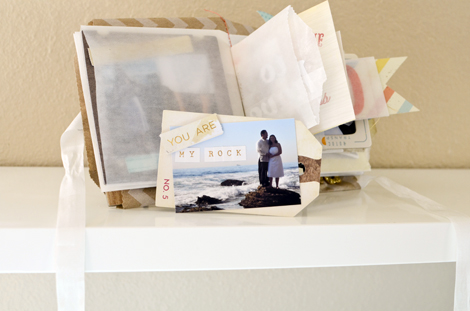 can't have a wedding without something blue, right?  the sky and the water... 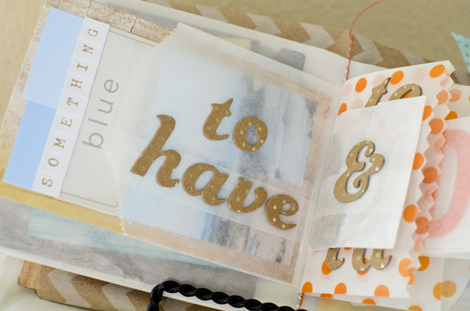 to have & to hold.  (and a little pocket of kraft confetti hearts.) 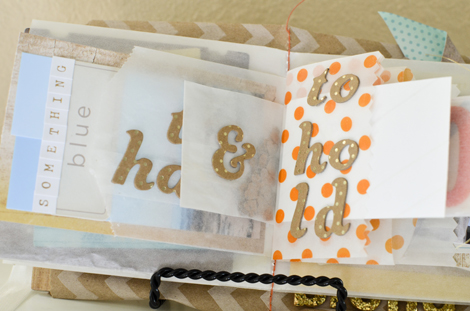 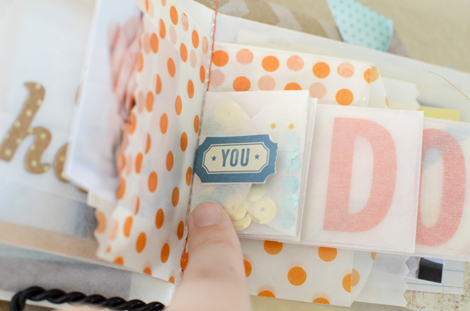 you - me and another tiny envelope--of sequins this time. 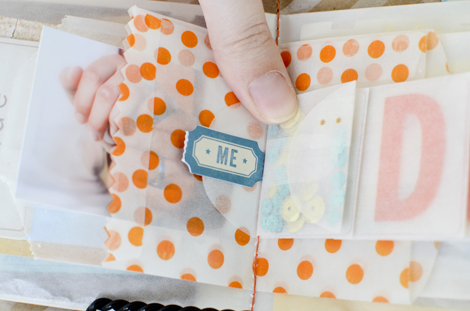 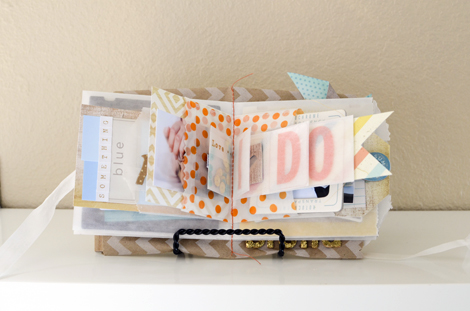 i really wanted to use the orange tile letters from The Pier because the colors from the 2nd wedding were orange and turquoise.  i put them in small glassine envelopes and then adhered/stitched them together to create a mini flip-blook. 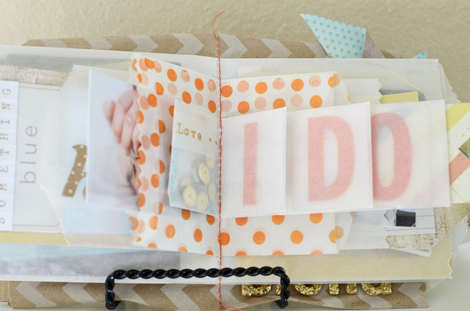 the second half of the mini is about our second wedding.  where the first one was small and took very little planning, the second one was larger and much more involved.  we went from coast to coast, too, throwing bash #2 in my hometown in New York.  it was actually this wedding that was the beginning of my paper craze.  i discovered Paper Source, for one, my love of obsession with color, and that i did indeed have a few crafty bones in my body (i had previously thought that i did not).  i made all of the wedding invitations, RSVP cards, favors, place cards, and ceremony programs.  we got to NY about a week before the wedding and by the big day, i was unbelievably stressed out!  needless to say, there are no plans for a third wedding on the horizon! 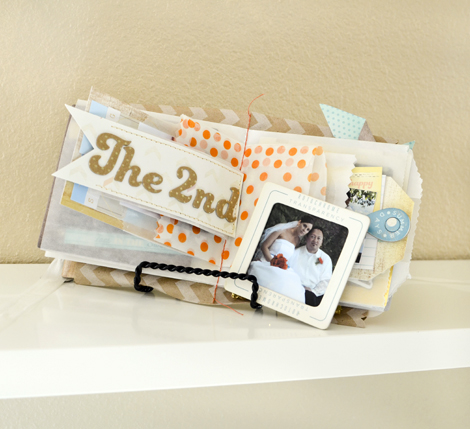 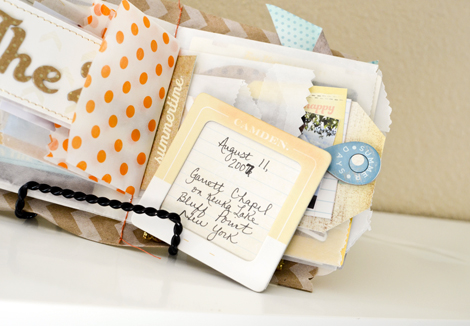 instead of the ocean, we were married at Garrett Chapel on Keuka Lake.  it is a gorgeous little chapel, all made of stone and built on a wooded hill overlooking the lake. it's incredibly peaceful and was one of the first places i took Hoss the first time he came out with me to visit my family in NY. 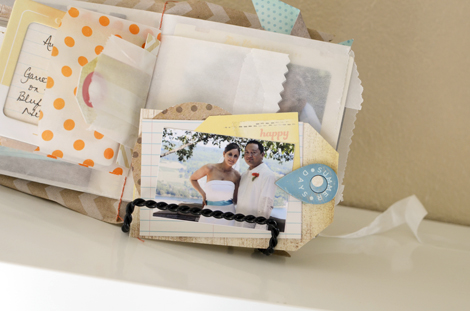 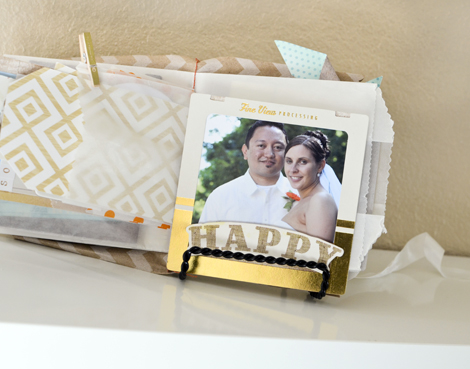 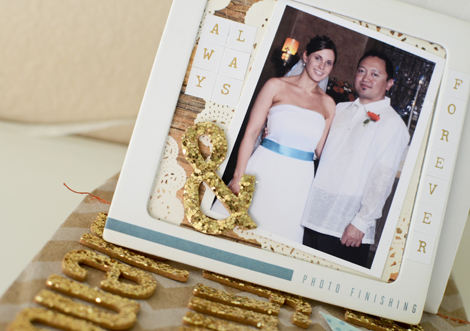 "a fine blend" is a reference to ourselves as a pair and the music we chose to put on our cd wedding favor.  the two of us, who really had not much else in common when we met, connected over our love of music.  i don't really know how to describe our tastes, but they are mostly vastly different!  we both agree 100% that neither of us is "Top 40" and we also agree that we both like a lot of different sounds.  but he likes mainly punk along with some hard and loud driving sounds while i like mainly Britpop and melodic artists.  yet somehow, we found ourselves bonding over obscure 80's bands and songs.  from there, our relationship grew and so did our musical tastes as we introduced new sounds to each other. 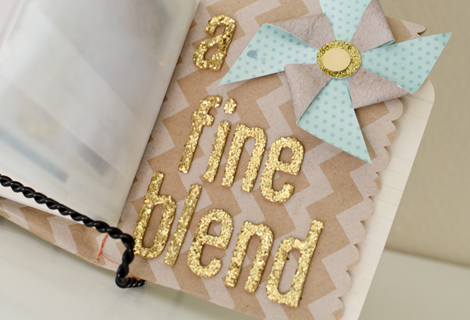 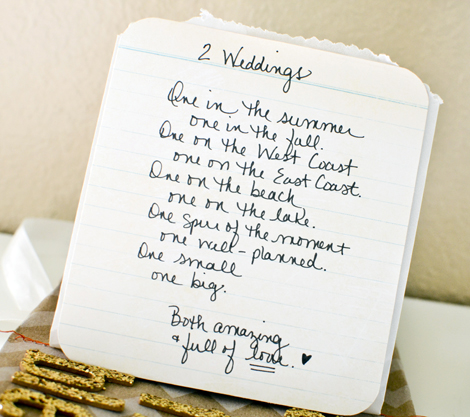 enough said, i think.  i hope you enjoyed my trip down memory lane.  this was a fun look back for me and i'll definitely be making more minis in the future.  one with the kids next time, for sure.  now let's just hope we don't have to wait until November for another date night! 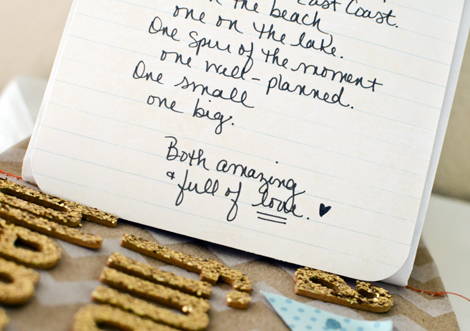